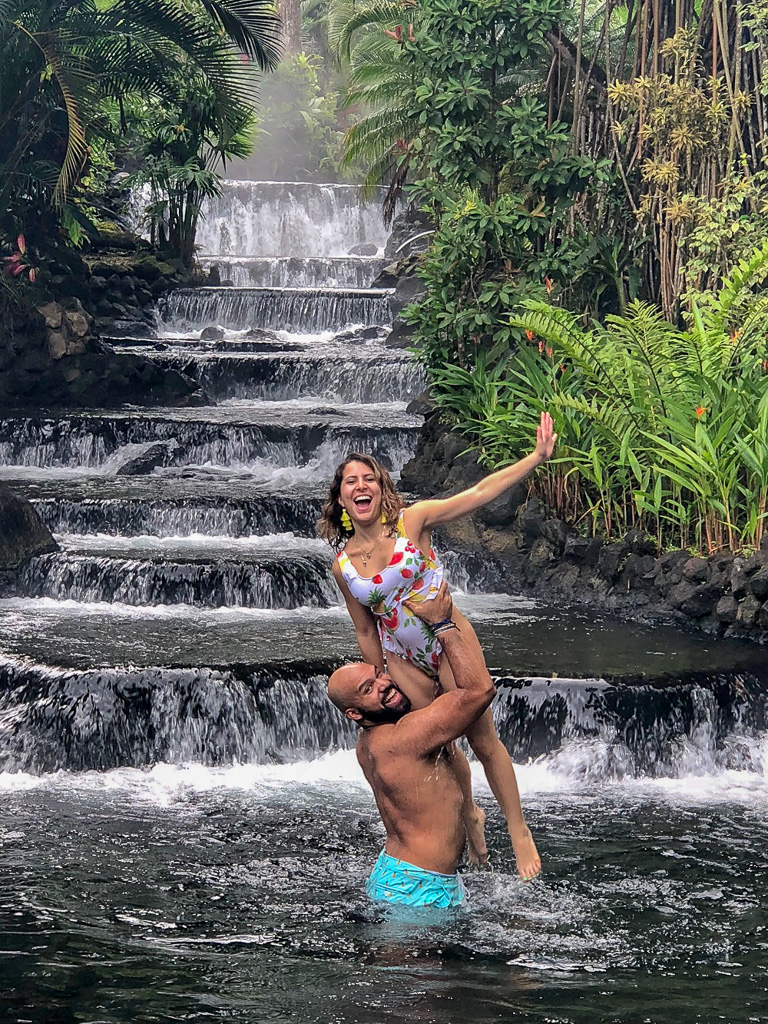 Costa Rica is the perfect destination for adventure seekers and nature lovers. There’s so many cool activities to do and beautiful scenery everywhere. Costa Rica has been on my travel list for some time now and I’m so glad I finally got to go. I spent five days and four nights in La Fortuna, which is a small town in Costa Rica. It’s known as a gateway to Arenal Volcano National Park. It’s filled with hot springs, a massive lake, and lush rain forest trails and waterfalls. There is so much to do and everyone is so friendly. My trip was amazing and there’s so much to share so be prepared for a lengthy post – haha! I’m sharing the hotels we stayed at and the top things to do in La Fortuna, Costa Rica.

During my trip, the sky was mostly cloudy, but we did have a little sunshine now and then. The rain was a little weird and inconsistent. It would literally rain for 5 minutes and then stop and then you would see a little sun and then it would rain 15 minutes later. But we didn’t mind since the rain gave us the full experience of being in the middle of the rain forest!

Traditional food in Costa Rica consists of a lot of rice and beans. They even mix it with scrambled eggs for a delicious breakfast. A famous lunch dish is called casados, which consists of meat, rice, beans, salad, and fried plaintains. They also have great seafood. I was also introduced to the most delicious sauce ever: Salsa Lizano. It has a sweet and tangy flavor. You can literally put it on anything and you can find it in any restaurant in Costa Rica. I bought some at the airport and I’m excited that they also sell it on Amazon!

We stayed at two hotels during our stay. We decided to splurge for one night so we were lucky that we got two rooms at the Tabacon Grand Spa and Thermal Resort. The hotel room was amazing. It was the biggest hotel room I’ve ever stayed in. It even had a jacuzzi in the bathroom! The views of the rainforest were also pretty amazing. By booking a room, you also get free access to their hot springs.

The second hotel we stayed at was the Lost Iguana Resort. This hotel is surrounded by the rain forest and it has incredible views of the Arenal Volcano. The food here is really good. They served more traditional Costa Rican food and they had plenty of that Salsa Lizano haha!

Top Things to do in La Fortuna Costa Rica

We did so many fun excursions! It was definitely an adventurous trip. We booked all of our excursions through Viator. They have good deals and a lot to choose from for everyone’s interests.

Here are the top things to do in La Fortuna, Costa Rica:

We spent our first morning in Tabacon in their hot springs and swimming pool. Their hot springs are amazing. There’s just endless pathways filled with hidden pools and you are surrounded by a tropical rain forest.

After lunch, we went on a volcano hike. We went to the Arenal Volcano National Park and crossed the jagged rocks of a dry lava field. We had an awesome tour guide who taught us all about the active volcano, the tropical forest and the abundant wildlife surrounding it. Unfortunately, it was a cloudy day so we didn’t have a super clear view, but it was really cool being up close to an active volcano!

After the hike, our tour guide took us to a hot spring of our choice. We chose the Ecotermales Hot Springs. Their pools vary in temperature with their hottest spring being 100 degrees. I’m always cold so I stuck with the hotter temperature waters haha! It was so relaxing and being in a hot spring at night. They also served us a delicious buffet dinner.

Our second full day was the most adventurous and my favorite day! In the morning, we went waterfall rappelling, which I highly recommend! You get to rappel down four cascading waterfalls and monkey drop one waterfall.

The first waterfall is over 150 feet. The guides briefly give you an instruction and before you have a chance to get nervous, you are thrown right into it! It was so fun rappelling right next to a waterfall. Sometimes, the guides even pull you right into the waterfall so you get wet! Haha!

The second waterfall is a monkey drop. Instead of rappelling, you jump off a cliff, where you zip line for a few seconds and then the guides drop you into a pool of water. The tour guides are controlling the rope the entire time so it doesn’t feel like a free fall. They can even drop you slow if you are a little nervous!

The next three waterfalls are less than 150 feet and by then you feel like a pro! After the rappelling, the guides take you to a traditional restaurant where they serve you casados! Yum!

During the second half of the day, we drove ATVs. We traveled to a private farm located near the Arenal Volcano and National Park. The guides taught us how to use the ATVs and we went on a few practice runs. Once we were ready, they took us through a rain forest and we went through crazy turns, bumps, and hills. It was a lot of fun. Along the way, we stop to see the views of the volcano and any animals on the trail. We also get to see volcanic craters that the eruption caused years ago.

The tour also stops at a natural river and you get to put on a volcano mud mask. The guide was nice enough to fill up empty bottles of water with mud so we can take it home with us. I loved the mud mask. Later that night, my boyfriend and I exfoliated our whole bodies with the mud. Our skin felt so soft and smooth! This was such a great tour. It was my first time on an ATV and it was awesome that it was through a rain forest!

Our last full day in Costa Rica was spent hiking to Rio Celeste. Before our trip, we were looking at places to see in Costa Rica and one of the places we saw to visit was Rio Celeste. The pictures were so pretty so I knew I had to sign up for an excursion that took us there. Rio Celeste is a river in Tenorio Volcano National Park. It is known for its unique turquoise color. Two mineral rich rivers from the volcano join and a chemical reaction creates the most beautiful blue.

This river is in the middle of the rain forest so it is a bit of a hike to get there. It is a 4 mile circuit trail where you get to see the Rio Celeste waterfall, the blue lagoon, a stretch of the calm river that makes a beautiful natural lagoon. This is a medium intense hike. There’s parts of it where you are walking up hills and steps to the waterfall. It is such a workout! It’s the stair climber on another level.

If it rains the day of or the day before, I definitely recommend you rent rubber rain boots for $2. The trail gets super muddy! So be prepared to get dirty on this hike. It was pouring the day of our hike so my pants and boots were covered in mud. It was kind of disappointing that it rained that day because the water wasn’t as turquoise as it should have been. The water had a grey bluish shade to it. However, it was still magical to see.

On this hike, we also got to see a lot of animals! We saw monkeys, sloths, toucans, etc. It was awesome!

Aside from all the adventures I had in Costa Rica, one of the things I will always remember is their famous phrase, “Pura Vida.” Pura Vida translates to “pure life,” but it is way more than that. It is part of their culture and way of life. They use this phrase to say hello, goodbye, and to let everyone know that their day is going great. It symbolizes the idea of enjoying life and being happy. It’s a reminder that people should be grateful for everything they have in life and that you shouldn’t dwell on the negative. This phrase is all about having a positive attitude and making the most of life! I love their motto. It’s so inspiring and I love everything it stands for. I will always carry this with me.

Pin to Save for Later 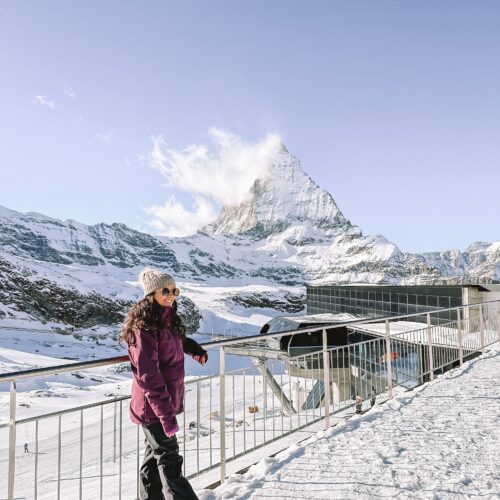 Ultimate Winter Vacation Packing Guide: What to Pack for a Cold Weather Trip 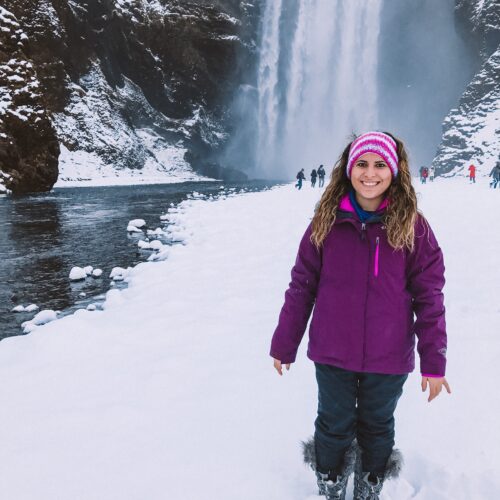 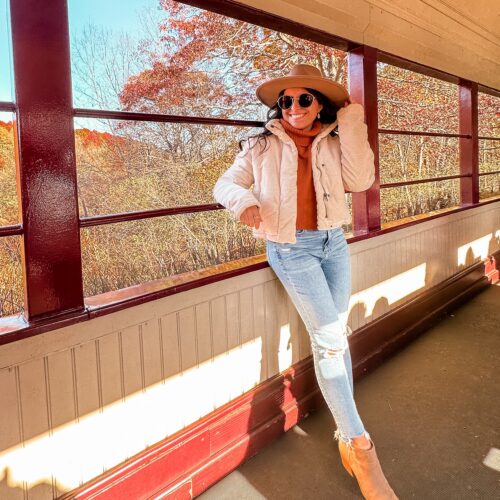 Best Things to do in Jim Thorpe PA